In a special Festival broadcast live from Riverside Theatre in Parramatta, join ABC Radio Sydney’s Richard Glover for all the fun and unpredictability of Thank God It’s Friday!

Laugh alongside a star-studded line-up featuring singer-songwriter Colin Buchanan, comedians Tommy Dean, Heidi Regan and Ivan Aristeguieta, and all the hilarity of the infamous Wheel of Death. At 6pm, Richard interviews three of the Festival’s most beloved stars: Larissa Behrendt, Kylie Moore-Gilbert and Christos Tsiolkas.

Supported by the City of Parramatta. 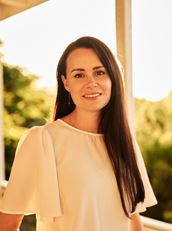 Dr Kylie Moore-Gilbert is a scholar of Middle Eastern and Islamic Studies. She speaks several Middle Eastern languages and has spent significant periods travelling and conducting academic research in the region. She was falsely charged with espionage and imprisoned in Iran from September 2018 to November 2020 before being released in a prisoner exchange deal negotiated by the Australian government. Kylie’s recently-released memoir The Uncaged Sky reveals the true story of the 804 days she spent as a political prisoner in Iran.

Larissa Behrendt is a filmmaker, broadcaster, academic and the author of three novels: Home, which won the 2002 David Unaipon Award and the regional Commonwealth Writers’ Prize for Best First Book; Legacy, which won the 2010 Victorian Premier’s Literary Award for Indigenous Writing; and the bestselling After Story. She has published numerous books on Indigenous legal issues and the influential history book Finding Eliza: Power and colonial storytelling. She was awarded the 2009 NAIDOC person of the Year Award and the 2011 NSW Australian of the Year. She is the host of Speaking Out on ABC Radio and is Distinguished Professor at the Jumbunna Institute at the University of Technology Sydney.

Christos Tsiolkas is the author of seven novels, including Loaded, The Jesus Man and Dead Europe. His novel, The Slap, won Overall Best Book in the Commonwealth Writers’ Prize 2009, was shortlisted for the 2009 Miles Franklin Literary Award, longlisted for the 2010 Man Booker Prize, won the Australian Literary Society Gold Medal, and was announced as the 2009 Australian Booksellers Association and Australian Book Industry Awards Books of the Year. His sixth novel, Damascus, won the 2019 Victorian Premier’s Literary Award for Fiction. Christos is also a playwright, essayist and screen writer. His latest novel is 7 1/2.

Richard Glover’s most recent book is The Land Before Avocado: Journeys in a lost Australia. Richard is also author of Flesh Wounds, described as a comic romp for anyone whose family was not what they ordered. He writes regularly for The Sydney Morning Herald and The Washington Post, and presents the comedy show Thank God It’s Friday! on ABC local radio.