Between the Lines with Jordy Rosenberg 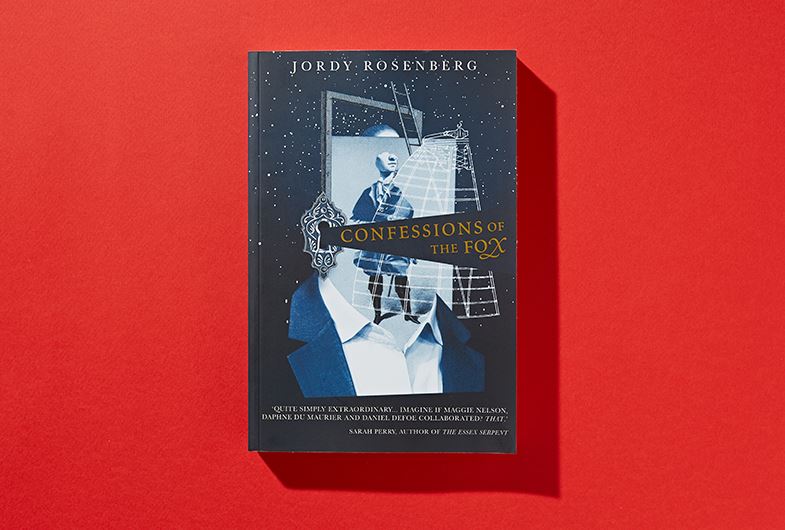 “His Heart twist’d in its red socket deep in his chest. He knew it then: he would never see his home again. As bitter as his home was, it was his. Never again to hear the urchins tumbling down Neal Street, the din ricocheting up the close-packed passageway – never again to smell his mother’s particular tart scent – the citrusy anxiety and disappointment that wafted off her Body like a Wind. He was being left here with the merchants and the accountants, the barristers with their busyness and hollow Eyes and looking-away.”
Jordy Rosenberg, Confessions of the Fox

Confessions of the Fox centres on discovery of a long-lost manuscript; a gender-defying exposé of one of London’s most notorious criminals, Jack Sheppard. Reimagining Sheppard as a transgender man, the book travels into the underworld of 18th-century London where queer subcultures thrive. The postmodern debut novel by Jordy Rosenberg is a bawdy, sexually-explicit historical fiction that questions ideas of truth and fantasy, and how imagination can be used to fill in the gaps.

Ahead of their appearance at the 2019 Sydney Writers’ Festival, go between the lines with Jordy Rosenberg as they discuss this year’s theme and who they’re looking forward to hearing from in the program.

The theme of this year’s Festival is Lie to Me. How does this theme resonate with you and your work?

One of the most seductive descriptions of writing I’ve ever read comes from the esteemed author Samuel R. Delany. In About Writing, Delany says fiction is a process of “creating a false memory with the force of history.” If this ability to awaken a false memory is, in a sense, the work of the writer, perhaps another way of putting this is to say that writers create radically pleasurable experiences that are fundamentally grounded in what could be seen as lies. The lie is the memory itself – a memory of something that never happened. But there is a truth here too – a truth to do with the force of literary form, and the ability of aesthetic structure to convey the weight of history, as well as the way that those forms and structures enable readers and writers who otherwise do not know each other to summon a space of contact and connection out of the ether.

What’s on your own reading list ahead of the Festival and why?

Sarah Perry’s Melmoth is at the top of my agenda for pre-Festival reads. I’m a huge fan of The Essex Serpent; I’ve learned a great deal from Perry’s mastery of postmodern gothic, and am really excited to get to experience what’s she done with this new one.

I’ve also just started Oyinkan Braithwaite’s My Sister the Serial Killer, and it’s so great. I’m quite devoted to genre fiction, and have such respect for authors who can throw a reader directly into the particular swirl of emotions generated by noir in particular. Moreover, it is extremely difficult to pull off comic noir (I’d love to do it myself), and Braithwaite seems to be doing so effortlessly.

Who are you most excited to meet and why?

I taught Ling Ma’s Severance in my PhD seminar this semester, and I and the students loved it. We read it in conjunction with Colson Whitehead’s Zone One, and it brought us so skillfully into a conversation about the geneaology of zombie tropes, the history of the racialization of labor and bondage in the United States, and the ‘apocalyptic office’ as context for literary fiction. It would be great to get to talk with her about writing this work.

I am very much looking forward to getting to hear Behrooz Boochani’s talk and reading, although because he is in detention, of course I won’t be able to meet him in person. I am not alone in being in awe of No Friend but the Mountains, not only for what it describes by way of a personal and broader history of immigration and detention in Australia, and not only for the sheer feat of its composition on WhatsApp, but also for the beauty and precision of its prose, which includes descriptions like this: “the boat takes off; like a heavily pregnant mare cantering carefully across a dark prairie of water.”

What’s the most interesting question you’ve been asked by an audience member?

It’s always really compelling when audience members reveal their inner 18th-century history buff. Recently someone asked me about the primary source texts on plague that grounded some of the plot points in my book, and we got into sharing our respective research on how the 18th-century institution of public health dovetailed in some pretty baleful ways with proto-modern forms of surveillance and policing.

This article is courtesy of Sydney Writers’ Festival. To view the original article click here